After a restless life which led him through many European countries, Rilke discovered a sanctuary in Valais that made recovery (or what he once called “Wiederanheilen”) possible in the wake of World War I. The Valaisan landscape helped him gain new creative momentum. Although the poet had resided in Switzerland since 1919, he first visited Sion and Sierre in 1920. In Geneva, he had admired Alexandre Blanchet’s paintings depicting Sion’s marketplace and the grape harvest in Valais.

In June 1921, he repeated his trip to the region in the company of his friend Baladine Klossowska. In Sierre, they alighted at Hotel Bellevue and began to search for a place to stay. Shortly before their departure, they discovered an advertisement in a shop window for a small medieval chateau available to rent or purchase, the Château de Muzot. Rilke visited the chateau and was won over by its charms despite some initial hesitation. On Rilke’s request, his benefactor Werner Reinhart rented the chateau and purchased it outright in the following year. Rilke required peacefulness and isolation. Muzot made it possible for him to regain the literary productivity of his pre-war years.

Rilke was deeply impressed by the Valaisan scenery. In a letter to Marie von Thurn und Taxis dated July 25, 1921, he summarizes his impressions:

“[…] what holds me on the other hand is this wonderful Valais: I was imprudent enough to travel down here, to Sierre and Sion; I have told you what a singular charm these regions exercised over me when I first saw them last year at the time of the vintage: the circumstance that in the physiognomy of the landscape here Spain and Provence so strangely interact struck me immediately even then: for both landscapes spoke to me in the last years before the war more strongly and decisively than anything else; and now to find their voices united in an outspread mountain valley of Switzerland! And this echo, this family likeness is no imagination. Just recently I read in a brief treatise on the plant life of the Wallis [Valais] that certain flowers appear here which are otherwise found only in Provence and Spain; it is the same with the butterflies: thus does the spirit of a great river (and to me the Rhone has always been one of the most wonderful) bear endowments and kinships through the countries.”

Shortly upon his arrival in the summer of 1921, Rilke acquainted himself with the history and culture of his new surroundings.

Turrets and castles played a meaningful role in Rilke’s life and work. They fringe, as it were, his life’s journey up to and including the discovery of Muzot. What the poet required in this phase of his life was a haven to which he could withdraw, a monkish retreat whose solitude enabled him to finish the elegies that he had begun in 1912 while a guest of the Princess von Thurn und Taxis in Duino. In his own words:

“And now I am moving out there tomorrow and will make a little attempt at dwelling in these rather stern castle circumstances that cleave to one like a suit of armor!”

“[…] should everything work out, I could then manage for a while with a housekeeper at Muzot. It lies about twenty minutes quite steep above Sierre, in a less arid, happy rusticity with many springs tumbling through it, with views into the valley, over to the mountain slopes and into most wonderful depths of sky. A little rustic church, situated above somewhat to the left in the vineyards, […] belongs to it.”

Beginning in 1923, Rilke’s physical suffering grew ever more palpable. In 1923, Rilke took a cure in Schöneck am Vierwaldstättersee. At the end of December and the beginning of January 1924, he stayed at the sanatorium at Val-Mont near Territet for the first time. His illness forced him to undertake further visits to Val-Mont between 1924 and 1926, sometimes for months at a time. He also stayed three times during these years in Bad Ragaz. His leukemia, which was incurable at the time, was first diagnosed towards the end of his life. Rilke died on December 29, 1926, in Val-Mont. He was buried on January 2, 1927 in the Raron cemetery during a deep freeze. Alma Moody played Bach during his funeral service.
↑

On October 27, 1925, Rilke wrote “a few personal requests” in the event “of some illness which would more or less remove me from my own jurisdiction.” In this Final Will & Testament he recorded his last wishes:

“[…] I should prefer to be laid to rest in the lofty churchyard of the old Church of Raron. Its enclosure was one of the first places from which I experienced the wind and light of this landscape, together with all the promises it helped me to fulfill later on, with and in Muzot.”

Rilke’s self-chosen epitaph, which has given rise to numerous interpretations, reads:

Rose, o pure contradiction, desire
To be no one’s sleep beneath so many lids.

Most likely around mid-December of 1926, Rilke wrote what was to be the final entry in his diary:

You, the last I recognize; return,
pain beyond help that sears the body’s cells:
as I burnt in the spirit, see, I burn
in you; the wood, that for so long rebels
against the flame you kindle, comes of age;
behold, I nourish you and burn in you.
My earthly mildness changes in your rage
into a rage of hell I never knew.
Quite pure, quite planless, of all future free,
I climbed the stake of suffering, resolute
not to acquire what is still to be
to clad this heart whose stores had become mute.
Is it still I that burns there all alone?
Unrecognizable? memories denied?
O life, o life: being outside.
And I in flames—no one is left—unknown. 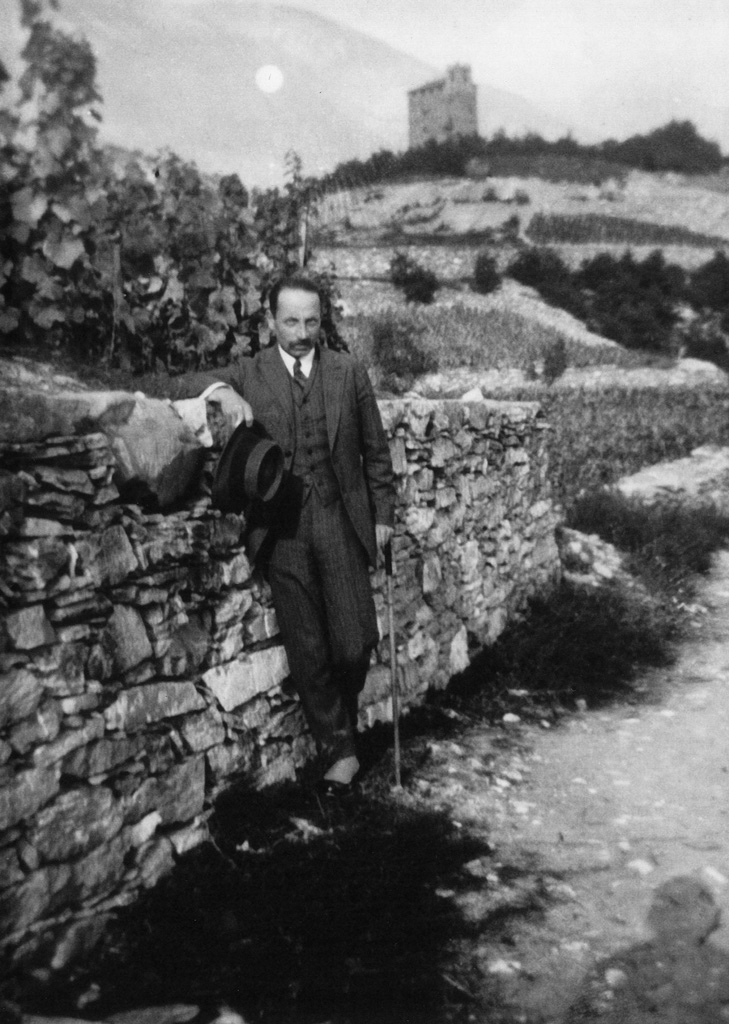 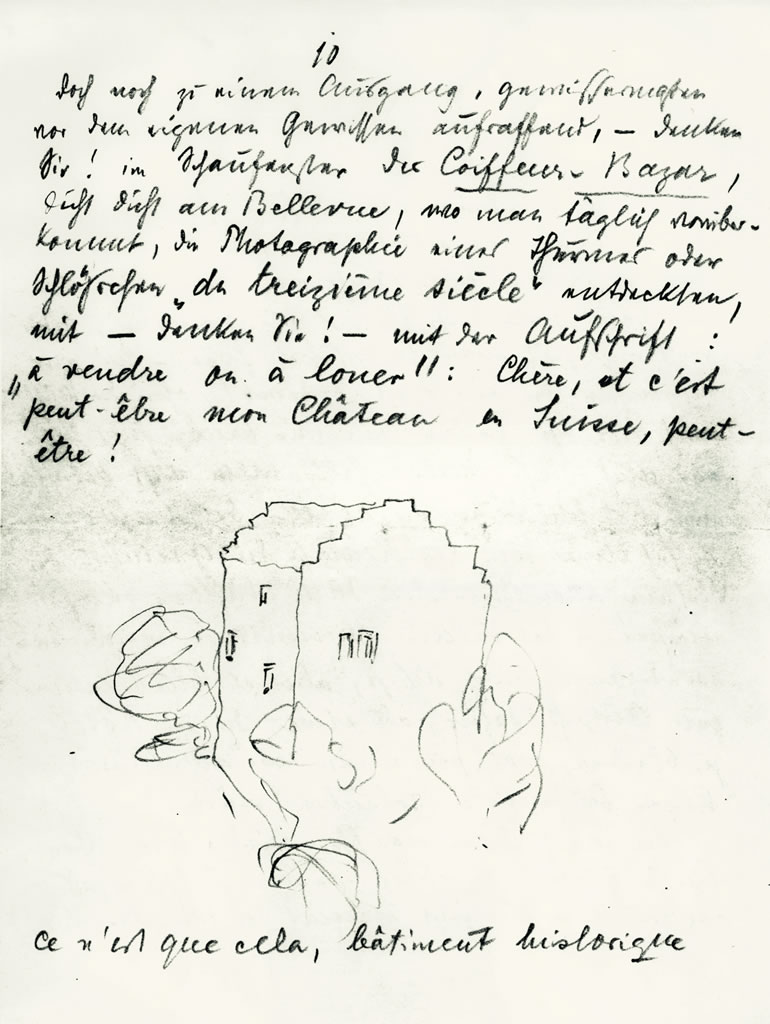 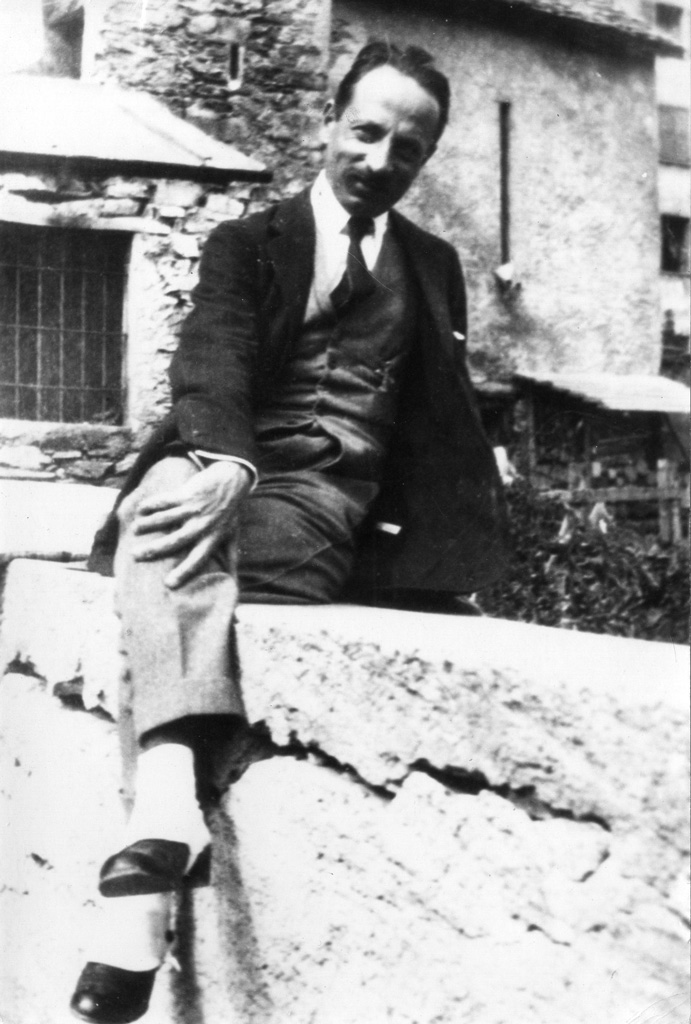 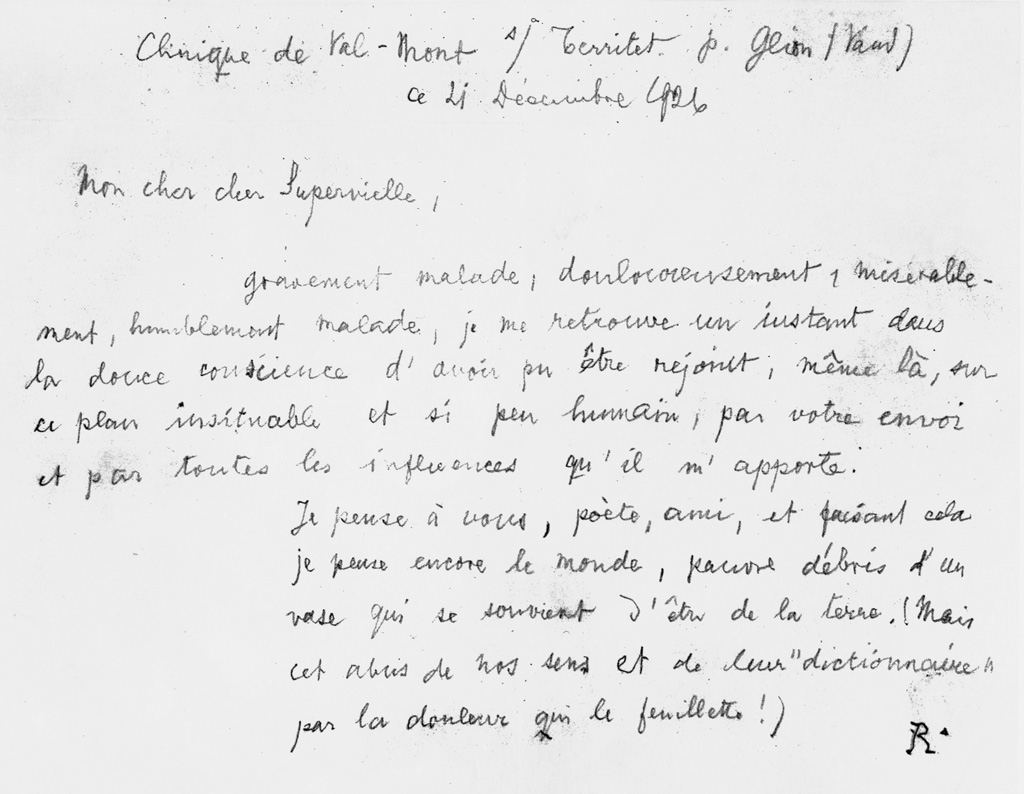