Kassner and Rilke met for the first time in Vienna (November 1907), then in Paris (May through July, October/November 1910). They met again on a regular basis in Duino near Triest, where they were both guests of Princess Marie von Thurn und Taxis (Fall 1911, April 1912, April/May 1914). They saw each other again in Munich, first in March of 1914 and then repeatedly over the course of the War.

Kassner first got wind of fellow Austrian Rilke in 1899 in Vienna, around the time Rilke was preparing to depart for Russia. They were introduced to each other in 1907 at a public reading by Rilke, and met subsequently in Kassner’s current residence, which was located in Hietzing near Vienna. In 1910 they spent time together in Paris, in a less-than-commodious house in the Rue Touiller not far from the Sorbonne. They rode together to Meudon to visit Rodin and admired the Ballets russes and Nijinski’s talent. They also met daily “for a cup of chamomile tea” in Café de la Paix (Eugène de Courten, 1974).

Kassner then set off for Duino (near Triest) and became a guest in the Princess von Thurn und Taxis’ castle. Rilke, also a guest there, nevertheless spent the winter of 1911/1912 at Duino alone. In 1912, he wrote the first two elegies and the beginning of the third at Duino. Kassner returned to Duino in 1912 and heard Rilke read aloud his elegies when he and the princess visited Rilke in his room.

In April and May of 1914, Kassner and Rilke were together in Duino, where it was still “the high season.” Soon, however, the war broke out, and guests were scattered in all directions. Despite the confusion of the war, the authors continued to exchange letters and see each other from time to time in Munich and Vienna. They both continued to write and send each other their pieces whenever they could be printed.

It is nearly impossible to compare the literary evolution of these two writers. It is established, however, that each inspired the other and that they were bound together in close mutual understanding. The one created a personally inflected “Physiognomy” in the service of a psychological analysis of the Greeks (especially Plato) and the Moderns, developing philosophic theses inspired partly by Christianity and partly by Eastern thinking in which intuition and mysticism played a substantial role. The other dedicated himself to a poetic multiplicity in which heroes of myth appear alongside great mystics and famous lovers.

Their paths crossed – almost by accident – in Sierre as well. They met there first at the beginning of August 1923, when Kassner visited Rilke at Muzot. In 1946, twenty years after Rilke’s death, Kassner settled in Sierre and remained there for the rest of his life. Valais’ landscape moved both men in a direct and unmediated way. This is evident in occasional comments by Kassner, and attested to even more strongly in Rilke’s writings, especially in his letters from the second half of 1921 and the poems with identifiable motives from Valais.

In spite of considerable differences in background and milieu, Kassner and Rilke are similar in a variety of ways. Kassner had an educational background of nearly encyclopedic, universal breadth, whereas Rilke presented himself as pursuing profundity in an eclectic way. Both, however, had a capacious interest in art and world literature. Kassner and Rilke have both emerged as translators of particular grace, and met as such in their separate translations of the work of André Gide.

The parallels between Kassner and Rilke have their limits, however. We have from Kassner – along with mentions of Rilke in letters and his remarks in conversations with Alphons Clemens Kensik – a continuous series of Rilke sketches and portraits that appeared at regular decades-long intervals (1926 – 1935 – 1946 – 1956). Rilke, in contrast, acknowledged Kassner’s influence in more splintered ways – in letters, citations, by way of intellectual integration, and in the fact that he read aloud from his friend’s work.

Kassner was nominated three times for the Nobel Prize in literature. Rilke was never considered, even though he wrote far more “popular” work (leaving aside his later poems, which the public perceived as ‘difficult’) than the philosopher Kassner. Rilke wrote of his friend as early as 1911:

“Is this man, I ask myself, not perhaps the most important of us all? This man has arrived at such pure sentences. He already seems secure from the misguided desires and confusions from which we, again and again, pull illusory energies [Scheinkräfte] – which deplete us.” 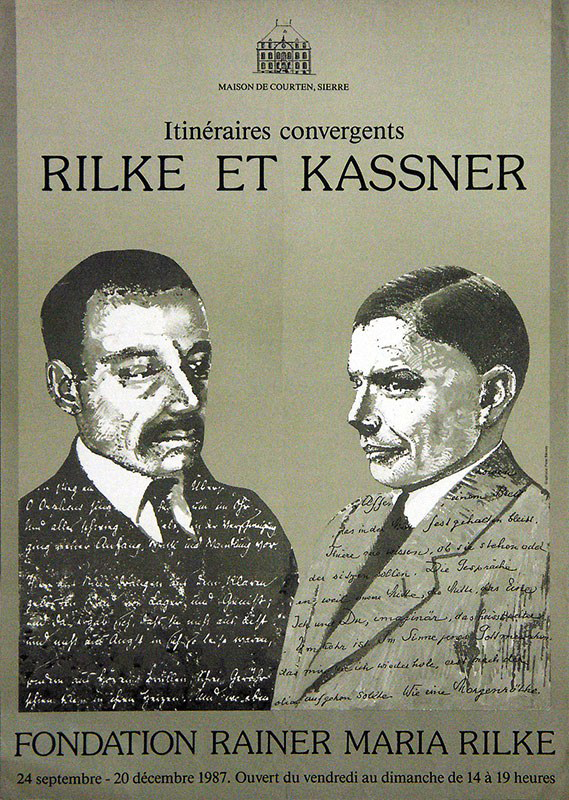